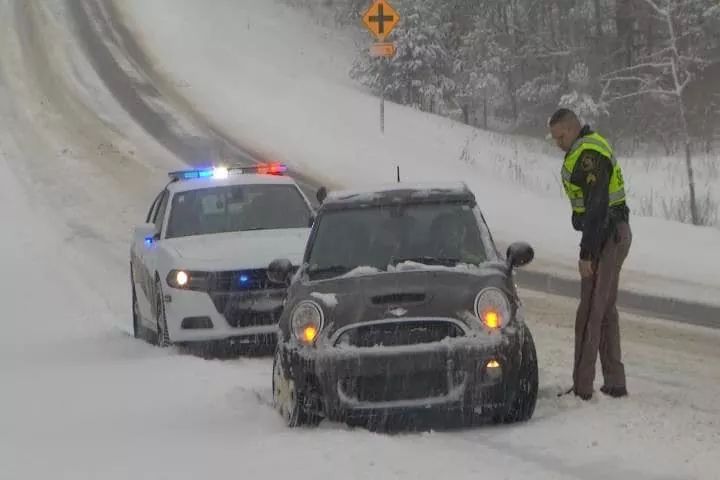 In most of the United States there is a policy of checking on any stalled vehicle on the highway when temperatures drop to single digits or below.

About 3 AM one very cold morning, Montana State Trooper Allan Nixon #658 responded to a call there was a car off the shoulder of the road outside Great Falls, Montana. He located the car, stuck in deep snow and with the engine still running. Pulling in behind the car with his emergency lights on, the trooper walked to the driver’s door to find an older man passed out behind the wheel with a nearly empty vodka bottle on the seat beside him.

The driver came awake when the trooper tapped on the window. Seeing the rotating lights in his rearview mirror, and the state trooper standing next to his car, the man panicked. He jerked the gearshift into drive and hit the gas.

The car’s speedometer was showing 20-30-40 and then 50 MPH, but it was still stuck in the snow, wheels spinning. Trooper Nixon, having a sense of humor, began running in place next to the speeding (but stationary) car.

The driver was totally freaked, thinking the trooper was actually keeping up with him. This goes on for about 30 seconds, then the trooper yelled, “PULL OVER!”

The man nodded, turned his wheel and stopped the engine. Needless to say, the man from North Dakota was arrested and is probably still shaking his head over the state trooper in Montana who could run 50 miles per hour.

Who says troopers don’t have a sense of humor?

Charlie is excited about finding a new stick!

This is what is typically heard during ant safety

Today's watch face is by Ballozi. This one is call

Favorite bumper sticker of the day.

When you assemble the Ruger Mkii correctly this is